Posted on August 27, 2019 by andrepenagranha

Seventy-seven years ago, in 1942, Pierre Lambrechts established – in a “decisive” way, in the words of Albert Grenier – the universal, essentially monotheistic, Trinitarian character of Celtic religion.  We now show, resting on a luni-solar calendar, the genesis of Celtic Trinitarian Monotheism in the staging of the Three Steps of the Sun: the Lugoves, and in the Atlantic perception of the 90-day seasonal cycle: The Matres; and we provide additional insights on their continuity in the religion imposed on Rome: Christianism.

The Three Steps Of The Sun And The Matres

The Three Steps Of The Sun And The Matres. Celtic religion and its influence on the Christian Present. Andre Pena & Joám Evans. In The XVIth International Congress of Celtic Studies. Bangor 22-26 July 2019. Bangor University, Wales Cymru Sesiwn 57 Ystafell 9.

The Celts from insular and continental Atlantic Europe left as a legacy a common pantheon and a common theology. This was, in essence, a Trinitarian Monotheistic Religion that encompassed a feminine lunar trinity: The Matres, and a masculine solar trinity embodying the three steps of the Sun: Sky, Sea, and the Other World in the Orbe Tripartite. 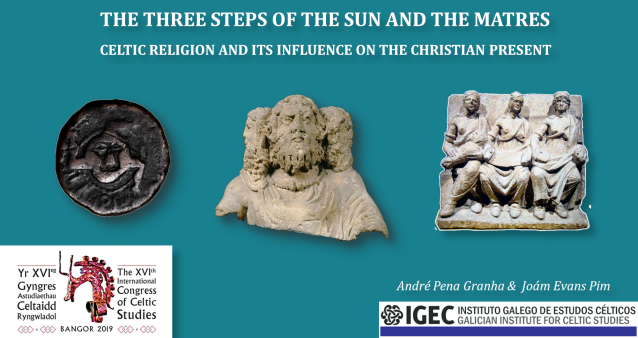 The Matres, characterized as three virgins through the seasonal cycle, also embody the Celtic political system.

The young Virgin that chooses the king that is to rule the Treba or Toudo remained as Saint Brigid or the Blessed Virgin Mary commemorated in Candlemas [‘Virgem da Candelária’ or ‘da Luz’]; when she married him and gave birth She became Mater (the ‘Mother’ of the dying god Esus or Hesus); and, after the death of the king, She returns to assume his soul and to take it to her kingdom in the Beyond. On the first of November she is transformed into an old virgin, Cailleach: “The Old Woman with the Blue Veil (cf. Lat. Caeluleus)”, with prodigious powers, builder of the megaliths and the landscape [finally rejuvenating on the eve of February 1, She reinitiates the cycle with a new king that is to rule the land].

It is conceived as a child and a teenager in the first step (with the related epithets sometimes shared in roman interpretatio by the same deities); as a psychopomp, guide of souls, in the second step; and as dying God and a judge of the afterlife in the third, symbolized by the Orbe Tripartite and the triskelion.

This presentation explores the continuity of these basic elements of Celtic religion in the new Trinitarian monotheistic religion that followed [Christianity] with its imposition by the Emperors of a decaying Rome after the crisis of the 3rd century CE.

This entry was posted in Institutional Archaeology. Bookmark the permalink.